Nausea: a book by Jean-Paul Sartre, a "philosophical" diary on the discomfort of the world in agony on the eve of the Second World War.
Tempo di lettura/Reading Time: 4 min

For fully understanding «Nausea» it is necessary to open a small parenthesis and describe in a few lines who its author is, Jean-Paul Sartre, and what was his contribution also philosophical. 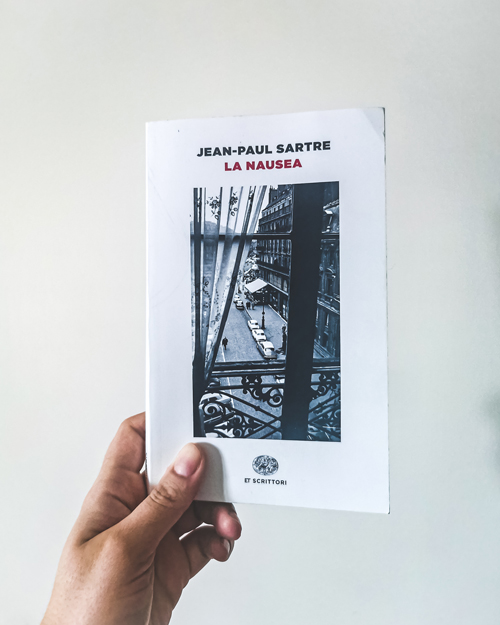 Who is the author of “La nausea”: Jean-Paul Sartre

Philosopher, narrator, essayist, playwright, political ideologist and cultural organizer, Jean-Paul Sartre (1905-1980) was one of the European intellectuals’ protagonists of the twentieth century and in his novels expressed the literary potential of the themes of existentialism. In his production he is inspired by Dostoevsky and Kafka, but also by the American Dos Passos.

His existence and his work are based on the themes of anguish and commitment. His vision of life is influenced by Husserl’s “phenomenology” and Heidegger’s Existentialism and is based on the idea of “being” as “nothingness”, from which derive the «anguish» and the «nausea» of man when he becomes aware of the uselessness of all his choices; these are in fact all “equivalent”, because as Sartre himself says, «are voted in principle to the check».

For Sartre in the human condition there is something paradoxical. In fact, the individual despite being free in front of the world, isn’t free to be free. The individual while choosing the sense of his being, doesn’t choose his being himself. He finds himself “thrown” into the world without explanation beyond the very fact of existence. Goals or ends are born only with man, who gives meaning to what has no meaning.

The emotional experience of this absurdity of existence is the «nausea», which Sartre describes in the novel of the same name through the events of the intellectual Antoine Roquentin who gradually discovers the «perfect gratuitousness» of existence. Such conceptions, however, don’t lead to the rejection of existence nor to nihilism.

Discovered and understood the problematic and the vanity of the human condition and reached indifference, the individual, according to Sartre, can in fact react through commitment and thus give a sense to his own destiny, creating values and ideals that lead him to take responsibility for himself and for society.

Therefore, Sartrian Existentialism is defined not as a passive acceptance of the negativity of life, but as a conquest of a new awareness. Man can achieve this only after the discovery of nothingness and after the crisis, which triggers in him the need to fight for freedom and for a better society. The intellectual thus becomes a “guide” and writing must constantly confront and relate to the contemporary world to produce changes in the social condition of man and in his consciousness.

The plot of “Nausea”

Sartre began writing Nausea in 1931, later reworking it until its publication in 1938.  The work narrates in diary form the story of a young intellectual of thirty years, Antoine Roquentin, who after a series of adventurous trips, moves to a city in the province, Bouville, with the intent of completing historical research on the Marquis of Rollebon, a libertine who lived in the eighteenth century.

After three years in Bouville he began to write a personal diary, the first piece of which dates to Monday, January 29, 1932. The decision to publish these writings isn’t of the author: the notebooks were later found among his papers and published without any retouching. Roquentin lives in a hotel room near the station and spends his evenings at the “Meeting of the railway workers”. For his research he spends hours in the municipal library, where he meets the Autodidact, a strange scholar who reads all the books owned by the library in alphabetical order.

The monotony of the provincial environment and its empty formalism arouse in Roquentin an ever-stronger sense of strangeness and the protagonist, lost interest in his studies, begins to perceive reality in an anomalous way and with increasing disgust. It is the «Nausea». The story proceeds like this by hallucinations. Until, in front of the root of a chestnut tree in a garden, the «contingency» of existence is revealed to him: Roquentin feels like a passive object, one with things, unable to separate the consciousness of living from the same life. So, everything, even its own existence, becomes unjustifiable and senseless for him. Understanding that «everything is free» provokes «Nausea»: «the stomach turns and everything starts to float».

The regular and reassuring life of the provincial of Bouville, described in a ferociously ironic way in the Sunday walk, is a way to hide the senselessness of existence. Before leaving for Paris, Roquentin enters for the last time in the “Meeting of railway workers”, where, listening to jazz music, he understands that writing can be a chance to give meaning to life.

Although Sartrian Existentialism, which is expressed between the pages of this book, may at first glance seem incomprehensible and hallucinating, the novel flows pleasantly.

In addition, Sartre has seasoned the tale of a note of suspense following in the footsteps of the detective novel. The speculative note of this diary involves reducing the action to the advantage of the inner monologue without making the reading boring.

In this meager narrative apparatus the characters are few and are archetypes. The Autodidact represents the man devoted to bourgeois ideals and the one who clings to culture, he identifies the saving illusion of culture. The other character in addition to the main character is his former girlfriend, Anny has also lost faith in life. She declined her life to passion and here she represents Love and Sex and how they also become useless in front of Nausea.

This is a novel that wraps the reader in his disgust and we find ourselves at the end of the reading beneficiaries of a really unexpected enrichment.